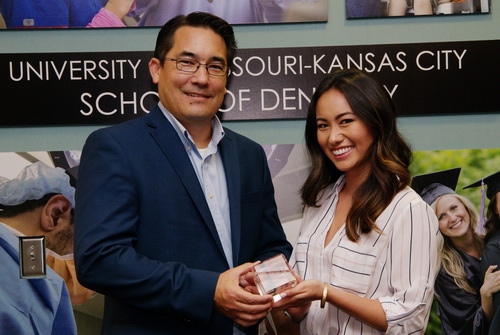 Last week the UMKC Summer Scholars program held a closed poster competition to select the UMKC representative for the 2020 Student Competition for Advancing Dental Research and its Application (SCADA), which will be held in March 2020 at the American Association for Dental Research (AADR) meeting in Washington, DC.  Judges for the competition were Drs. Timothy Cox, Aparna Naidu, and JoAnna Scott.  Jeff Furgerson, UMKC’s regional DENTSPLY Sirona representative, came to UMKC to present an award to the UMKC SCADA competition winner at a luncheon following the competition. A table with all the summer scholars, mentors and their research projects is included below.

We’re pleased to announce that Kathryn Teruya, DDS Class of 2022, was selected as the winner to represent UMKC at the AADR meeting SCADA competition next year.  Her poster title was ‘Changes in Dental Student Empathy During Training.’  Jeff Furgerson, UMKC’s DENTSPLY Sirona Representative, presented Kathryn Teruya with the SCADA award.  DENTSPLY Sirona sponsors the national SCADA competition every year.

Please join us in congratulating Kathryn on this accomplishment!  We also want to congratulate all of the other scholars on their excellent performances at the poster competition last Thursday. This was a very close competition, and it was apparent that the scholars and their mentors dedicated considerable time and effort to prepare the presentations.  While Kathryn will represent UMKC at AADR for the national SCADA competition, all of the Summer Scholars will attend the meeting and present posters at the general session. 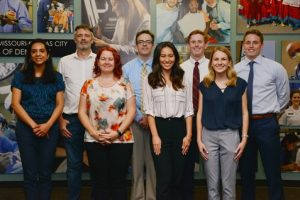