When fourth year dental student Victoria Bridwell was invited to speak at her high school career day, she knew her passion for dentistry would be evident. What she didn’t expect were all the thank you notes.

At the actual career day, Bridwell presented in one of the school’s classrooms where the students would rotate between different presenters. She estimates that she spoke to over 100 high schoolers over five sessions. The students impressed her with their attentiveness and questions she received from them. But what was unexpected was the show of appreciation for her presentation.

“About a week later I received a package in the mail full of hand written thank you notes from many of the students,” said Bridwell. “When I opened it, I almost started crying. I had no idea those were coming but it absolutely warmed my heart.”

Bridwell’s former guidance counselor at Willard High School, located near Springfield, Missouri, asked her if she would want come back to participate in the school’s career day. It was actually the second time they had put out the invite but prior request came during her first year of dental school.

As most first years know, that is a big ask. “There was obviously know way I could make that happen with all my finals,” said Bridwell. “This time I was able to make it work. It was an honored they asked me and I was excited to share my passion for dentistry.”

Her passion for dentistry began at a young age. She knew she wanted a career in health care, with helping people as her end goal but she wasn’t sure what exact path she’d pursue. Ultimately, it was the time she spent in an orthodontics chair getting her braces that convinced dentistry was right for her. It was the positive change she experienced with her newly straightened smile and the confidence she gained.

“I love that dentistry is medical science but it’s also artistry,” said Bridwell. “Your using your hands to take something that is broken or diseased and causing pain, and make it not only functional but beautiful again.”

Bridwell is the first person in her family to go to college so it was important to her to also provide the high schoolers some general tips and tricks for managing the collegiate experience. She remembers being in their shoes, feeling like she didn’t have many people she could ask about what to expect from college. She of course covered all things dentistry but also emphasized things like campus visits.

“I just wanted to give a little guidance, give them a chance to ask questions they may be afraid to ask when they’re visiting colleges,” said Bridwell. “Even if dentistry isn’t their path, I wanted to give them some advice and direction for their future.” 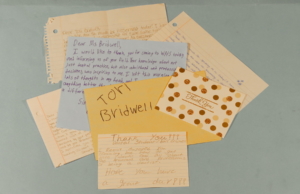 Congratulations to one of the school’s emerita faculty, Dr. Cindy Amyot, who is a contributing author to the National Institutes of Health (NIH) publication, Oral Health in America: Advances and Challenges. The foundational report is a comprehensive effort to tell the whole story of oral health in America. Two decades ago, the predecessor to this report was published by the Surgeon General and was considered a public health milestone. Amyot is a former associate dean and previously was the director of the division of dental hygiene. She is also a UMKC alum several times over: BS DH ‘92, MSDH ‘93, Education Specialist ‘00 and Doctorate of Education ‘03.

According to Amyot, it’s surreal being listed amongst such prestigious researches. “I am honored and humbled to be a contributing author for this publication,” she said. “I consider this a career highlight. Onward!” 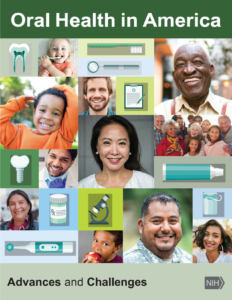 Three faculty and staff retirees were recognized at this year’s Staff Holiday Lunch. Each were presented with a personalized memento commemorating their service and retirement. The keepsake features a picture of the school that includes well wishes from colleagues and students.  Because of the pandemic, they were previously recognized at a virtual event but it was wonderful honoring some of them in-person. Those included:

Read more about their virtual retirement event and others that were recognized at https://dentistry.umkc.edu/paying-tribute-to-retirees-with-nearly-150-years-of-combined-service/

The School of Dentistry Staff Council and Dean Haas and hosted the annual holiday lunch for staff, faculty and retirees on Dec. 17.  Attendees were encouraged to wear their most festive wear and they did not disappoint. Everyone was treated to a delicious lunch as well as a selfie station, games, a raffle for door prizes, karaoke and numerous popular gift baskets donated by departments. Enjoy photos from the festivities.

Faculty and staff at the School of Dentistry hosted the annual Cookie Crunch on Dec. 9. The event began many years ago as a way for staff to celebrate the students’ hard work and give them a bit of respite before finals. Staff, faculty and student judges handed out prizes for best overall cookie and best packing among others. Check out the photos of the fun!

The UMKC School of Dentistry SNDA/HSDA (Student National Dental Association/Hispanic Student Dental Association) hosted a recent toy drive for Children’s Mercy Hospital. With COVID protocols in place, the kids being treated at the hospital must keep any toys they use during their stay so there is a shortage of toys at the hospital right now. These generous students organized the donated items and delivered them to the Children’s Mercy.

The following 3 students completed the requirements for the Oral and Craniofacial Sciences MS degree. Congratulations!

Photos from their defenses here.

On Friday, October 29th, the School of Dentistry got into the spirit of fall by wearing costumes and elaborate hats. Residents and staff in Ortho came dressed as Cruella De’Ville, dalmatians, superheroes and the guards from Squid Game. Elsewhere, staff got festive by decorating hats and participated in the contest sponsored by the School of Dentistry Staff Council.

Pearly whites were plentiful as well as Chiefs red at the TeamSmile event at Arrowhead Stadium on Oct. 26. Students from the UMKC School of Dentistry volunteered at the event, delivering much-needed dental care to 200 local elementary students.

Sponsored by the United Way, more than 40 students and faculty from UMKC participated, providing initial dental screenings, X-rays and recommendations for what care the kids would need that day. Each year, dentistry and dental hygiene students participate in three TeamSmile events: at the Kansas City Chiefs, Royals and Sporting KC.

Started in Kansas City, TeamSmile is a national advocacy group that works with professional and college sports teams to provide children in need with a life-changing dental experience. For those youngsters who may have a fear of the dentist, seeing their favorite athletes can help put them at ease. The friendly faces of UMKC students help, as well.

Since the organization’s inception in 2007, UMKC School of Dentistry students and faculty have volunteered their time with TeamSmile. The organization provides comprehensive care to the children who participate, from preventive care such as fluoride treatments and cleaning to extractions and root canals.

“We’re incredibly proud to have been involved with TeamSmile for over a decade,” said Becky Smith, one of the faculty members who accompanied the students at the event. “It gives our students the opportunity to hone their skills, provide dental care to some of our youngest citizens of Kansas City, and help instill the importance of volunteerism going forward.”

As the School of Dentistry staff has navigated throughout the past 18 months, there have been many changes and we have all adjusted and kept moving along. In introduction and celebration, the new dean of the SOD, Dr. Steven Haas, treated the staff to breakfast and hosted a meet & greet. Special thanks to Racquel Adams—(acting president of SOD Staff Council), Stephanie Stewart-Towns—UMKC Staff Council representative, Alexander Zier—Dean’s Office, Jeff Primos—Director of Business Administration, and of course Dean Haas for all of the breakfast event arrangements. Thank you to all of the staff for participating to celebrate one another as such an awesome team!