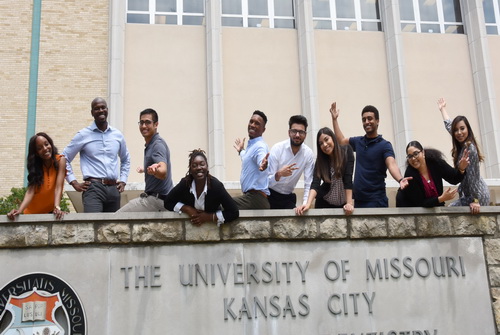 Getting accepted into dental school is no small feat, so Jay Trivedi and Alameen Nuru are working extra hard this summer — and getting extra help — to make sure their applications and scores on the DAT, the Dental Admissions Test, are the best they can be.

They both will be seniors this fall at UMKC and are among 10 college undergraduates and recent graduates in the STAHR Scholars Dentistry program. The 10-week summer program, which wrapped up last week, is a key part of the School of Dentistry’s efforts to recruit and retain students from diverse backgrounds.

“This is such a great opportunity to prepare for the DAT,” said Trivedi, whose family moved to the United States from India a decade ago. “I’m majoring in chemistry and biology, and the program is helping me review and refresh what I know, and learn even more.”

Nuru, whose parents came to America to escape civil war in Ethiopia, shares Trivedi’s enthusiasm for the summer program. He said it provided regular online test preparation sessions for the parts of the DAT on chemistry, biology and quantitative reasoning – “and I’m studying several more hours every week on my own.”

The School of Dentistry program, formerly known as the Admissions Enhancement Program, or AEP, also gave the students advice on the personal essay that will accompany their application, and help with interview techniques and practice interviews.

Along with its name change, the program got a boost from a $3.2 million STAHR Partnership grant to help UMKC’s Schools of Dentistry, Medicine and Pharmacy expand their minority recruitment programs. (STAHR stands for Students in Training, in Academia, in Health and Research.)

The program this summer started with two weeks of preparation work online, followed by a week on campus, then six more weeks of online work and, finally, a second week on campus that included a “graduation” ceremony July 25. Trivedi, whose family lives on the Kansas side of the Kansas City area, and Nuru, from the Missouri side, were joined by other students from Kansas, Missouri, Arkansas, Texas and North Carolina.

“It has been great to meet the others and to get to know them,” Trivedi said. “Having exposure to other pre-dental students has been so valuable, to know there are others like me and to hear how they fell in love with dentistry, too.”
Trivedi and Nuru already knew something about the UMKC School of Dentistry because each has had an older sibling in the school. Trivedi’s sister, Vaidehi, is in the DDS Class of 2020, and Nuru’s brother, Mohammed, graduated with the DDS Class of 2019. And both were eager to learn more this summer.
“It was really valuable to meet faculty members and admissions staff and current dental students, and to get to shadow them and see what we would be learning,” Trivedi said. “My sister did AEP, so I knew this would be an amazing program.”
Trivedi, Nuru and their colleagues, just to get into the STAHRS program, had already distinguished themselves in academics and leadership.
After his senior year in high school, Trivedi was involved with KMOM and MOMOM, outstate Mission of Mercy projects run by the Kansas and Missouri Dental Associations. “I got to assist dentists, and most of them graduated from UMKC. I also learned that there are many areas in the United States, especially rural areas, that need more access to dental care.”
At UMKC, Trivedi continued to serve by joining the board of the Pre-Dental Society. As its vice president, has lined up speakers and helped organize educational events.
Nuru said when he was in high school he joined HOSA — Future Health Professionals, an organization that teaches about health careers. He helped organize group events, including a 5K run-walk to support a teacher who had leukemia. “Then at community college, before I transferred to UMKC, I was in the Allied Health Club and organized events including a bone marrow donor drive,” Nuru said.
“I knew I wanted to be in health care, to help others, but I wasn’t sure about dentistry until my brother did an externship to Joplin, Missouri. It was a great experience for him; it really had an effect. Knowing from him that there are underserved areas in the United States that really need dental care helped me decide on dentistry.”
At their graduation ceremony, Melanie Simmer-Beck, RDH, PhD, professor and director of the School of Dentistry STAHR Scholars Dentistry program, said, “It was inspiring to work with such a talented and committed group of students. Our faculty volunteers, staff and students put in many hours to make this a success.”
In August, Trivedi, Nuru and their colleagues will be taking the DAT — and filling out their applications for dental schools. There’s no telling where they will be accepted and enroll, but they agreed on a couple of things:
“It would be awesome to come to the dental school at UMKC,” Trivedi said. “The fulltime faculty I have met are so committed and really want to help students and the community.”
And, Nuru said, “The summer program has been great. From the DAT preparation to shadowing current students and getting to know the other pre-dental students like me, this program has really helped me.”

Photos from the event.