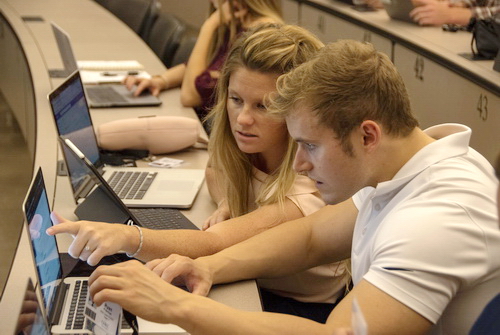 The School of Dentistry on Wednesday welcomed its newest students, the 109 members of the DDS Class of 2023 and the 31 members of the DH Class of 2021. Wednesday’s activities focused on getting the students – and their laptops, smartphones and other devices – in synch with the school’s computer systems.
Thursday and Friday will be packed with information on curriculum, finances, safety, student groups, libraries, student services and other school policies and resources. And on the personal side, the students will get their scrubs – navy for DDS students and grey for DH students – and enjoy get-to-know-you activities, tours with mentor groups, a pancake breakfast and an ice cream social.
“We survived the first day,” said Ella Algermissen, a DDS student from Albuquerque, New Mexico. “So far, so good.”
After her computer training, Algermissen was chatting with two new classmates, Courtney Wilson from Kansas City and Nikol Flynn from Wichita. They were testing their ID badges for access to the school and, just as importantly, starting the bonding that helps students succeed during their years of intensive learning and training. All three were excited to be at UMKC.
Wilson, who earned her undergraduate degree at nearby William Jewell College, said she was happy to not have to leave her hometown. “The school has a great reputation,” she said. “It’s the dental school of the Midwest!”
Algermissen, who graduated from New Mexico State University, and Flynn, who earned her undergraduate degree at Park University in Parkville, north of Kansas City, said they also were attracted by the school’s reputation, and its tuition exchange program that essentially offers Missouri tuition rates to students from Kansas, New Mexico, Arkansas and Hawaii.
Flynn also was drawn to UMKC because her mother got her nursing degree here, and her brother is a 2011 DDS graduate. “I love Kansas City,” she said, “and I knew UMKC had good programs.”
Wilson is one of 60 students in her class from Missouri, and Flynn is one of 26 Kansans in the class. Algermissen has one other classmate from New Mexico. The rest of the class breaks down with five students each from Hawaii and Arkansas, two each from South Dakota and Kuwait, and one each from Arizona, Iowa, Michigan, Nebraska, New Jersey, North Carolina and Oklahoma. The class of 58 women and 51 men has an average science GPA of 3.66 and DAT academic average of 20. The age range is 21 to 43.
The new DH class of 30 women and one man has students from Missouri, Kansas, Arkansas, California and Nebraska. The average science GPA is 3.43 and cumulative GPA is 3.51. The age range is 19 to 25.
Another new student, Jason Lau from Hawaii, said he felt welcome even though he was a long way from home. “The upperclass students from Hawaii have been really helpful,” Lau said. “It’s kind of like having family here.” He also was used to being far from home, having earned his bachelor’s degree at Boston University.
“I’ve been here about a week, so I’m getting settled in,” he said. “Everything has been good so far.”