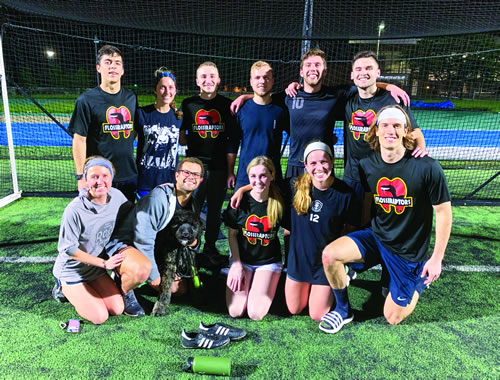 Like every DH and DDS class at the UMKC School of Dentistry, the DDS Class of 2021 has built strong teamwork and camaraderie — and not just in classes and the dental labs. Almost half of the members of the class also have played on one of its Flossiraptors intramural teams.

“Intramural sports has been a fantastic way for our class to bond outside of class. I look forward to the games every week,” said Chad Phillips, one of the teams’ rotating captains along with Brock Buzbee and Vincent Markovitz. A team member came up with the Flossiraptors name, and Phillips and another classmate, Charlie Bakula, came up with the idea for team T-shirts. A graphic designer friend created the logo.

The first Flossiraptors team played flag football in fall 2017, and men’s basketball, coed volleyball and coed soccer soon followed. All told, 49 members of the Class of 2021 have been on a Flossiraptors roster for at least one sport, and several have played multiple sports.

Most of the teams have had success on the field, often placing first or second in UMKC-wide competition. The volleyball team has struggled but still has had great fun playing.

“I think my favorite aspect of the Flossiraptors is that every sport consists of a completely different team depending on who wants to play, but we can always put on our team shirts and come together to have fun,” Phillips said.

Caption: Coed soccer is just one sport the Flossiraptors enjoy.