Professor and Chair of the Department of Oral and Craniofacial Sciences and Director, UMKC Center of Excellence in the Study of Dental and Musculoskeletal Tissues (CEMT)

Dr. Johnson received his B.S. in Biochemistry from the University of Minnesota in 1976. He subsequently received his Ph.D. in Biochemistry from the University of Minnesota through the Mayo Graduate School of Medicine, Mayo Clinic, in 1980. He conducted post-doctoral training in molecular biology at Baylor College of Medicine, The Department of Cell Biology. Prior to joining the faculty at the UMKC School of Dentistry, he held faculty positions at St. Jude Children’s Research Hospital, The University of Akron and Creighton University. He joined the Department of Oral Biology in the UMKC School of Dentistry as a Professor in July 2005 where he is a member of the Bone Biology group. He serves as a reviewer for several journals, has served on a number of various national peer review study sections and is a member of the AAAS, AADR/IADR, The American Society of Bone and Mineral Research and The American Society of Human Genetics. He serves on a number of journal Editorial Boards and reviews for over a dozen different journals.

Dr. Johnson has long-standing interests in the molecular basis of human disease and for the past twenty-five years has focused on the molecular genetics of osteoporosis. Osteoporosis is a disease characterized by decreased bone mass and compromised bone strength that predisposes affected individuals to an increased risk of fracture. Osteoporosis is a major health problem in this country and around the world and the economic burden in the US is currently estimated at around $20 billion and increasing as our populations continues to live longer. It is estimated that some 40% of postmenopausal women will suffer an osteoporotic fracture in their remaining lifetime and of those 25% will die within one year of suffering their fracture and another 25% will require long-term nursing home care/special assistance and will never regain a full measure of their former lifestyle.
While at the Creighton University Osteoporosis Research Center, Dr. Johnson began working with a family that has a high bone mass (HBM) trait. He and his group localized the gene for this trait to chromosome 11 (11q12-13) and in collaboration with industry partners, Genome Therapeutics and Wyeth Pharmaceuticals he laboratory identified the HBM causal mutation in the Lrp5 gene, which is a glycine to valine substitution at amino acid position 171. The structure of this protein and position of the HBM mutation are shown in Figure below.

LRP5 and its close homolog, LRP6, are coreceptors with the frizzled tansmembrane protein for Wnt. Binding of Wnt to the LRP5/frizzled co-receptors results in activation of the b–catenin or Wnt canonical signaling pathway shown in the Figure below. Wnt binding results in a serried of phosphorylation events that ultimately leads to the association of the axin protein with the cytoplasmic tail of LRP5/6, the inhibition of GSK and the release of b–catenin into the cytoplasm where it accumulates. A small portion of the b–catenin then translocates in to nucleus where it interacts with the TCF/Lef-1 family of transcription factors and regulates the transcription of key target genes.
Our research has shown that the HBM mutation in LRP5 reduces the threshold of bone for response to mechanical load and increases the robustness of the bone formation response once that threshold for response is reached. We now know that LRP5 is absolutely required for bone to be able to respond to mechanical load through its regulation of Wnt/b-catenin signaling. Research in my laboratory is focused on understanding now LRP5 and the HBM mutation function to regulate bone mass through mechanical loading of the skeleton. Recent studies have shown that b-catenin signaling is first activated in osteocytes in response to load and clearly identifies the osteocyte as the mechanosensory cell in bone. Load appears to work through Lrp5 dependent and independent activation of the b-catenin signaling and involves autocrine and paracrine signaling between osteocytes and eventually with cells on the bone surface. We are currently attempting to define the molecular pathways that orchestrate the response to load in bone. This work involves a combination of molecular biology, cell culture and transgenic and knockout mouse approaches. We believe that by understanding the role of LRP5 in regulating the bone formation response that we may be able to develop new anabolic agents that can be used to treat and possibly cure osteoporosis.
In an attempt to understand how osteocytes activate the Wnt/β-catenin signaling pathway in response to load, in collaboration with Dr. Ganesh Thiagarajan, finite element models of strain fields and strains experienced by osteocytes are being constructed. These models have incorporated for the first both the radius and the ulna along with intraosseous membranes joining these two bones in the forearm. The strains experienced by computer simulated loading are being biologically validated using 2D digital image correlation. Osteocyte level strain fields have been built into the models incorporating the heterogeneous properties of bone. Interestingly the β–catenin signaling activation pattern observed within osteocytes in vivo upon mechanical loading when merged with the osteocyte level finite element models suggest a strain threshold for activation. This better explains the observed data than traditional finite element models.

Another major are of research focus in the Johnson lab is the biochemical crosstalk between skeletal muscles and osteocytes. Our recent studies suggest that specific muscles may produce factors that condition the response of the osteocyte to load and that osteocyte derived factors alter the differentiation and contractile properties of muscle cells/fibers. This crosstalk appears to involve the Wnt/β-catenin signaling pathway in osteocytes and in muscle fibers. We have also observed important differences in this crosstalk between males and females, which has focused our recent attention of the role of sex hormone receptors in modulating this crosstalk.

This core operation supports a number of functions relating to the maintenance of transgenic and knockout mouse lines and the characterization of bone phenotypes of these mice.

Animal Breeding and Skeletal Phenotyping
1. This core is responsible for the management of our animal breeding colony. Transgenic and knockout mouse lines deposited in the core by a team of collaborators are bred as needed to meet the demands of a large range of experimental studies. The core also provides outside investigators breeding pairs of mice for their studies upon completion of required MTAs.
2. This core also performs genotyping of all lines of mice being bred in the facility.
3. Skeletal Phenotyping is supported by this core at three levels; a) bone densitometry (Piximus), b) X-ray analysis (Faxitron) and c) microCT imaging (Scanco vivaCT40) of excised bones or live animal for high resolution 3D analysis of bone properties. 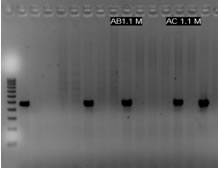 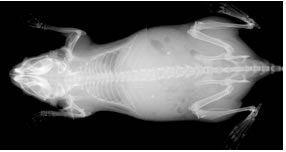 X-ray image of the mouse 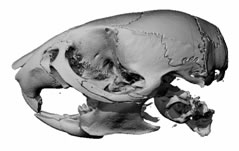 This core operation was the ability to perform both forearm and tibia compression loading on mice and rats (Bose Enduratec 3200).
1. 3-and 4-point bending testing of bone biomechanical properties.
2. If requested by investigators (recommended) the core will perform load: strain analysis using strain gages applied under controlled load conditions (ex vivo) so that subsequent in vivo loading levels are used that generate equivalent strains across lines of mice (e.g. transgenic or knockout versus control lines).
3. Digital image capture analysis methods are currently being integrated into the core operation as means of validating Finite Element Analysis (FEA) models to predict strain fields produced by in vivo loading.
4. MicroCT based static load imaging is performed for FEA model validation.

Full training and technical support is provided for all investigators and limited analysis capability is provided as a service function of these cores.