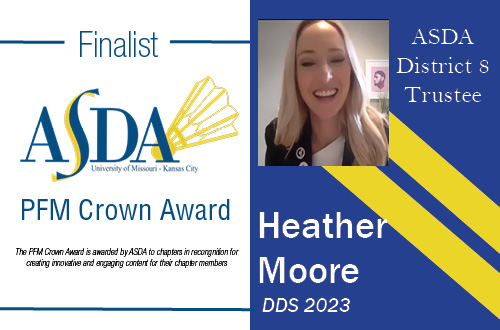 The American Student Dental Association awards chapters the PFM Crown award for excellence in creating innovative and engaging content for their members in 2020. This year, the UMKC ASDA chapter has been selected as a finalist!  Watch the video they created for the district finalists here.

Heather Moore (DDS 2023) has been elected to the American Student Dental Association of the Board of Trustees. She will be serving as District Eight Trustee, which oversees six chapters including University of Iowa, Creighton University, University of Minnesota, University of Nebraska, A.T. Still University and University of Missouri – Kansas City. Her role will include guiding chapters in our district and acting as the official liaison between the local chapters, the district and national ASDA. During her term, she hopes to champion impactful discussion on a National level to advocate for further diversity within the profession of dentistry!

Congratulations to the chapter and to Heather!